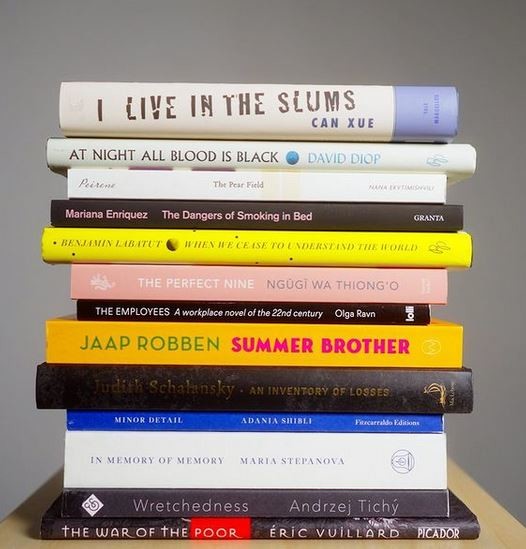 A foto ilustra a longlist

At Night All Blood is Black - David Diop

Peppered with bullets and black magic, this remarkable novel fills in a forgotten chapter in the history of World War I. Blending oral storytelling traditions with the gritty, day-to-day, journalistic horror of life in the trenches, David Diop's At Night All Blood is Black is a dazzling tale of a man’s descent into madness.

The Dangers of Smoking in Bed - Mariana Enríquez

The stories in her new collection are as terrifying as they are socially conscious, and press into being the unspoken—fetish, illness, the female body, the darkness of human history—with bracing urgency.

When We Cease to Understand the World - Benjamín Labatut

The crew of the Six-Thousand Ship consists of those who were born, and those who were made. Those who will die, and those who will not. When the ship takes on a number of strange objects from the planet New Discovery, the crew is perplexed to find itself becoming deeply attached to them, and human and humanoid employees alike start aching for the same things: warmth and intimacy. Loved ones who have passed. Shopping and child-rearing. Our shared, far-away Earth, which now only persists in memory.

In Memory of Memory - Maria Stepanova

The War of the Poor - Éric Vuillard

Sixteenth-century Europe: the Protestant Reformation takes on the powerful and the privileged. Peasants, the poor living in towns, who are still being promised that equality will be granted to them in heaven, begin to ask themselves: and why not equality now, here on earth?

There follows a violent struggle. Out of this chaos steps Thomas Müntzer: a complex and controversial figure, who sided with neither Martin Luther, nor the Roman Catholic Church. Müntzer addressed the poor directly, encouraging them to ask why a God who apparently loved the poor seemed to be on the side of the rich.